These two hotels were originally constructed in 2018 and share a lobby / reception area, amenities, 3,767 square feet of meeting space and hotel staff.  Both are “Walt Disney World Good Neighbor Hotels” that offer transportation to the Disney theme parks as well as provide guests the ability to purchase Disney theme park tickets at the hotel itself.

The SpringHill Suites features 180-suites that are larger than typical hotel rooms and include a separate living / working area with wet bar and mini-refrigerator.  The TownePlace Suites features 155-suites is designed for longer stays and include fully equipped kitchens with stainless steel appliances & granite countertops as well as separate living/working and sleeping areas.

The Location of the SpringHill Suites & TownePlace Suites

The SpringHill and TownePlace Suites enjoy one of the most convenient locations in the Orlando tourist district along Palm Parkway and immediately adjacent to Interstate 4.  This property is centrally located to all the Orlando area theme parks, the Orange County Convention Center, International Drive and several of Orlando’s major shopping & entertainment destinations.

There are several restaurants and retail venues within a very short distance to these hotels w resort which include a Walgreens Pharmacy, Chili’s Grill & Bar, Giordano’s, Kobe Japanese Steakhouse and Olive Garden. Additional shopping outlets and restaurants are located within one mile along International Drive.

For groceries, a Winn Dixie Supermarket is located 5 minutes from the hotels at 11957 South Apopka Vineland  Boulevard.  There is also a brand new SuperTarget also  about 5 minutes away at 11619 Daryl Carter Parkway.

The Orlando area theme parks are also a short distance to the hotel and per Google Maps, travel time is as follows (non-peak hours):

Like most of the Orlando area resorts, a pool area is an absolute must for vacation travelers.  The SpringHill Suites and TownePlace Suites has a beach-entry resort style pool with a small kid’s splash area.  The pool area is simple but functional and does not feature any modern features like water slides. 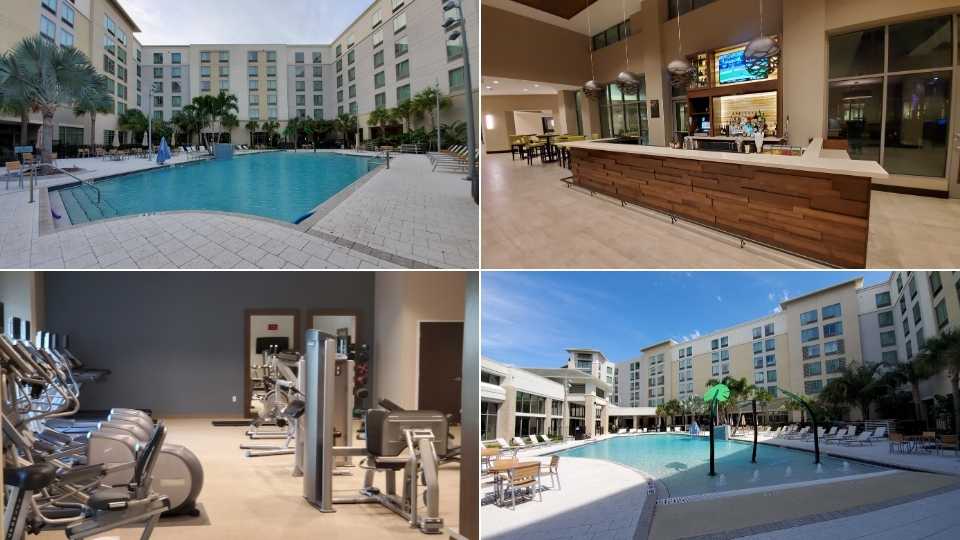 Other hotel amenities include:

The primary food service option is Sagos Bar & Grill which is a dual lobby and poolside bar that is open from 4:00 PM to 11:00 PM daily and seasonally for lunch (check with the hotel for seasonal times).  There is a variety of American fare which can be enjoyed in the lobby / poolside or delivered directly to the guests room.

In addition to Sagos, the two hotels offer a complimentary hot buffet breakfast to guests in either hotel.  There is a large breakfast area with multiple rooms on the first floor of the hotel.

There area multiple types of rooms across both the SpringHill Suites and the TownPlace Suites.  These were indicated to be as follows: Hotels Rates at the SpringHill Suites

The follow rates are the rates for each of the resort varies for different dates throughout 2022 and 2023.  The rates shown below are the best available rate for two adults in each individual room type offered at the SpringHill Suites Orlando Lake Buena Vista.

The rates were obtained from the hotels web site at the time of publication of this article.

Hotels Rates at the TownePlace Suites

The follow rates are the rates for each of the resort varies for different dates throughout 2020 and 2021.  The rates shown below are the best available rate for two adults in each individual room type offered at the TownePlace Suites Orlando Lake Buena Vista.

The rates were obtained from the hotels web site at the time of publication of this article.

There are no resort fees at each of this resort but there is a 6% resort tax on top of a 6.5% sales tax on nightly rates as well as a $17 per night parking charge.  If you are a Marriott Bonvoy member you can use points for this resort.

What We Liked about the SpringHill Suites and TownePlace Suites

There are many different things to like at this resort property.  Following are some of the highlights:

There were a few things not to like when staying at the these hotels.

What We Think the SpringHill Suites and TownePlace Suites is Perfect For:

These hotels are great for a wide variety of travelers coming to the Orlando area for and are perfect for:

Endless Summer Florida has been to many different economy, moderate and luxury hotels in the in the Orlando tourist area and have stayed at a number of extended stay type hotels.   We feel that these two hotels represent a very good value for the money as compared to other similar type properties throughout Central Florida.

Endless Summer rates this resort a 4.0 out of a possible 5 stars and recommend these hotels for your next trip to Orlando to visit the theme parks or for a longer terms stays.