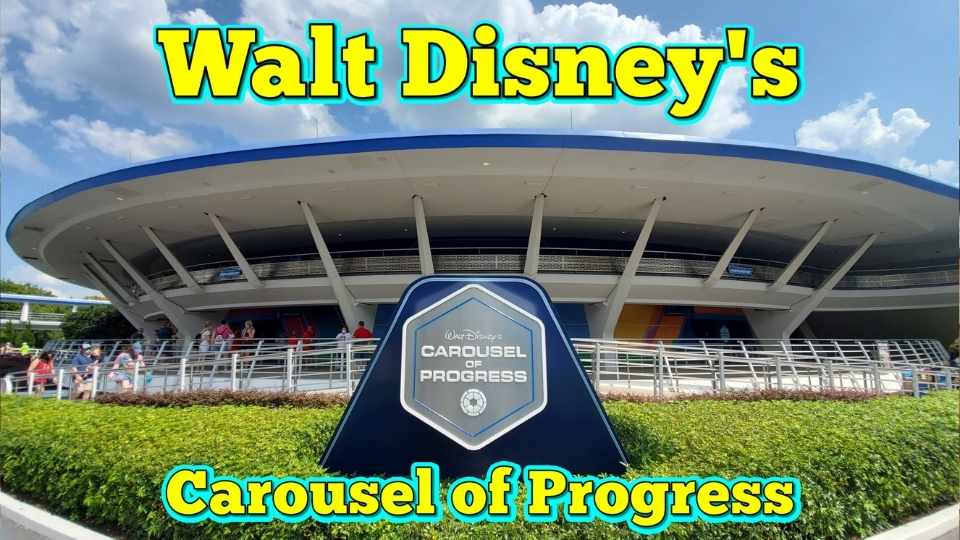 Originally opened in January 1975, Walt Disney’s CAROUSEL OF PROGRESS is one of the classic Disney rides.  This attraction is located in the Tomorrowland area of the Magic Kingdom at the Walt Disney World Resort in Orlando, Florida and features the song “There’s A Great Big Beautiful Tomorrow”.

The attraction consists of four different acts using Audio-Animatronics that takes guests through the 20th century showing how technology and innovation has changed how the American family lives.  The star of the show is a father named “John” who also is the narrator of the show.

Walt Disney’s Carousel of Progress is open to all ages and there are no height limitations.  It’s a slow and easy attraction; we consider it to me more of a show than a ride but since the theater spins, it’s probably considered to be both.

The four acts of the Carousel of Progress show are as follows:

Act 1 starts out with John sitting in the kitchen with his dog Rover.  He talks about the modern conveniences of that time like electric lights, washing machines, phonographs and “horseless trolleys”.

During Act 2 John and his family are celebrating the fourth of July.  This act is all about the Roaring 20’s where advances in technology continue to make life a little better.  These include a refrigerator, vacuum and electric lights.

John also talks about the recent accomplishments of the era including sports stadiums, electric starters for cars and cross country train travel in just 3 days.

In Act 3 John and the family are getting ready for Halloween.  During the scene John sits in his kitchen marveling about the refrigerator, automatic dishwasher and television along with how times are changing.

Act 4 opens with John’s family celebrating Christmas and surrounded by the most modern home technology including a home virtual reality video game and a personal computer.

But even with all the modern innovations, John still burns the Christmas turkey.

See the complete show at our video below.

Following are the answers for some of the most frequently asked questions about the Carousel of Progress at the Magic Kingdom in the Walt Disney World Resort.

How long is the Carousel of Progress show?

Walt Disney’s Carousel of Progress show is approximately 20 minutes in length.  Wait times for this attraction are typically short and we have found them to be less than 15 minutes on most summer days.

Where in the Magic Kingdom is the Carousel of Progress located?

Is Walt Disney’s Carousel of Progress worth seeing?

Walt Disney’s Carousel of Progress is one of the classic Disney attractions and since it typically has a limited wait time, we think it is worth seeing.   However, we do not consider it an attraction that can be visiting multiple times during a visit like Space Mountain, the Seven Dwarfs Mine Train and Big Thunder Mountain Railroad.

Can you bring food and beverages into Walt Disney’s Carousel of Progress?

Food and drinks are not allowed when inside Walt Disney’s Carousel of Progress.  Cast members tend to keep a very strict eye out during the show.

Walt Disney’s Carousel of Progress is an indoor attraction and does not close in times of bad weather.  The attraction is held within a fully air-conditioned building. Are you a huge fan of Disney?  If so, than here is the ultimate Disney vacation where you will travel around the world including visits to all 12 Disney theme parks. Adventures by Disney just...