The State of Florida has more than 1,300 miles of coastline so you can be sure that a number of the beaches are among the world’s best.  From those on the northern Atlantic coast stretching south to the Florida Keys, and back up along the Gulf of Mexico to the Florida panhandle, there are literally hundreds of beaches to choose from.

So what’s the best beach in Florida?  Well I guess that depends on what you are looking for.  Whether it is a quiet and relaxing beach to listen to the waves roll up on the shore or one with bars, restaurants, entertainment and all the “action” you desire, Florida has a beach for you.

The Seven Best Beaches in Florida

The State of Florida has more than 1,300 miles of coastline so you can be sure that a number of the beaches are among the world’s best.  From those on the northern Atlantic coast stretching south to the Florida Keys, and back up along the Gulf of Mexico to the Florida panhandle, there are literally hundreds of beaches to choose from.

So what’s the best beach in Florida?  Well I guess that depends on what you are looking for.  Whether it is a quiet and relaxing beach to listen to the waves roll up on the shore or one with bars, restaurants, entertainment and all the “action” you desire, Florida has a beach for you.

Having lived in Florida for more than 30 years we’ve been to a number of beaches so based on our experience as well as the rankings by a number of travel services and trip reviews, here is our list of top seven (7) beaches in Florida. 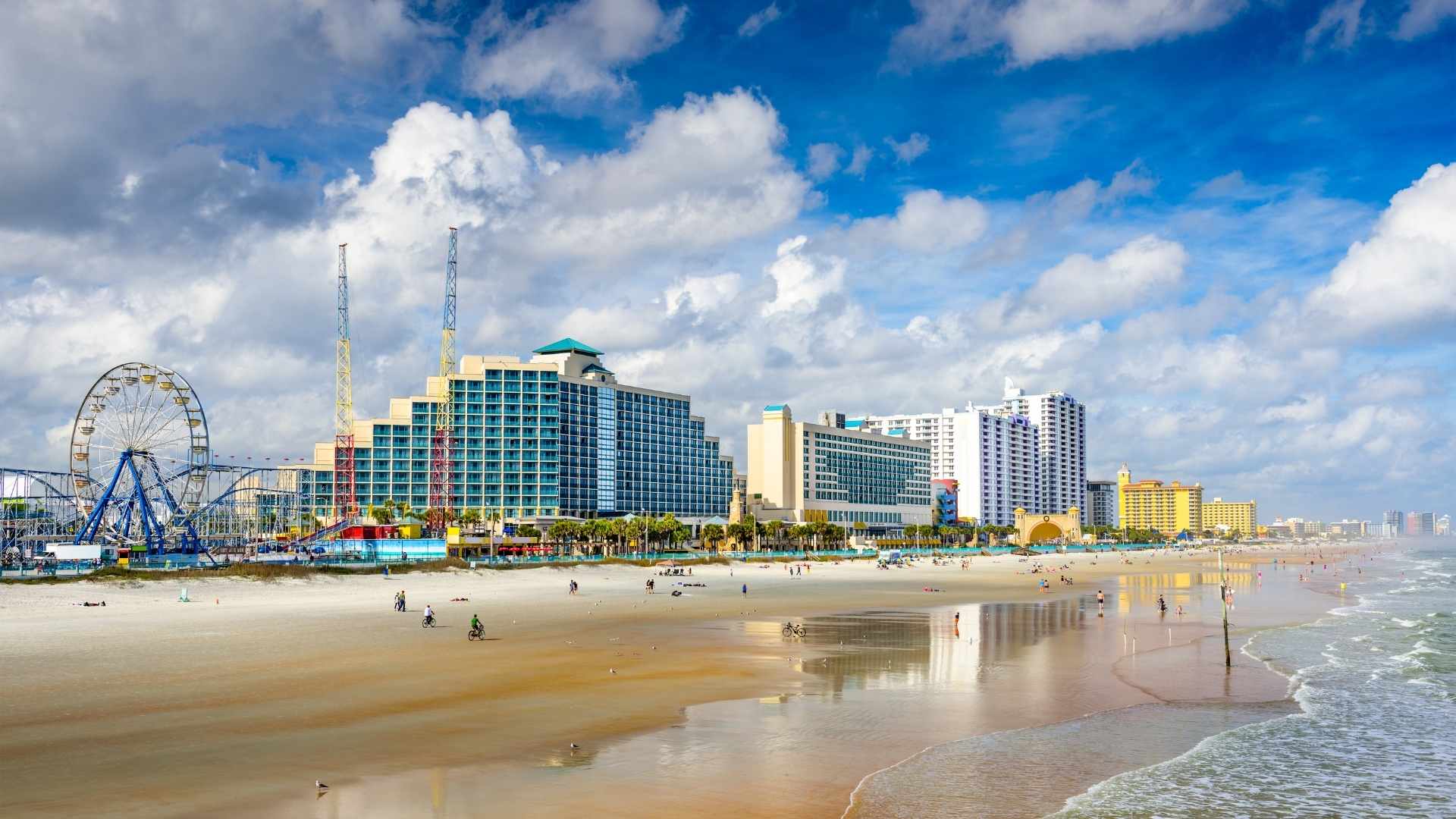 Daytona Beach is considered one of the world’s most famous beaches from its history as a beach for high-speed auto testing and racing due to its hard packed sand.  The Daytona 500 race was actually held on the beach in the 1950’s. Even today there are a number of areas of the beach where cars are permitted alongside beachgoers.  If you choose to park on the beach be sure you know where and when it will be high tide as you don’t want your car to be washed away by the waves.

Daytona Beach is also known as the Festival Capital of the World as it is home to events like Bike Week, the Daytona 500 and the Coke Zero Sugar 400, Biketoberfest, and the Halifax Art Festival.  And just a few decades ago, Daytona Beach was the unofficial home of “Spring Break” for college students.

With approximately 23 miles of beach along the Atlantic Ocean, an amazing boardwalk and pier with restaurants, rides & games, and numerous beachfront hotels to choose from, Daytona Beach is a great family escape.

Our favorite Daytona Beach hotels include: 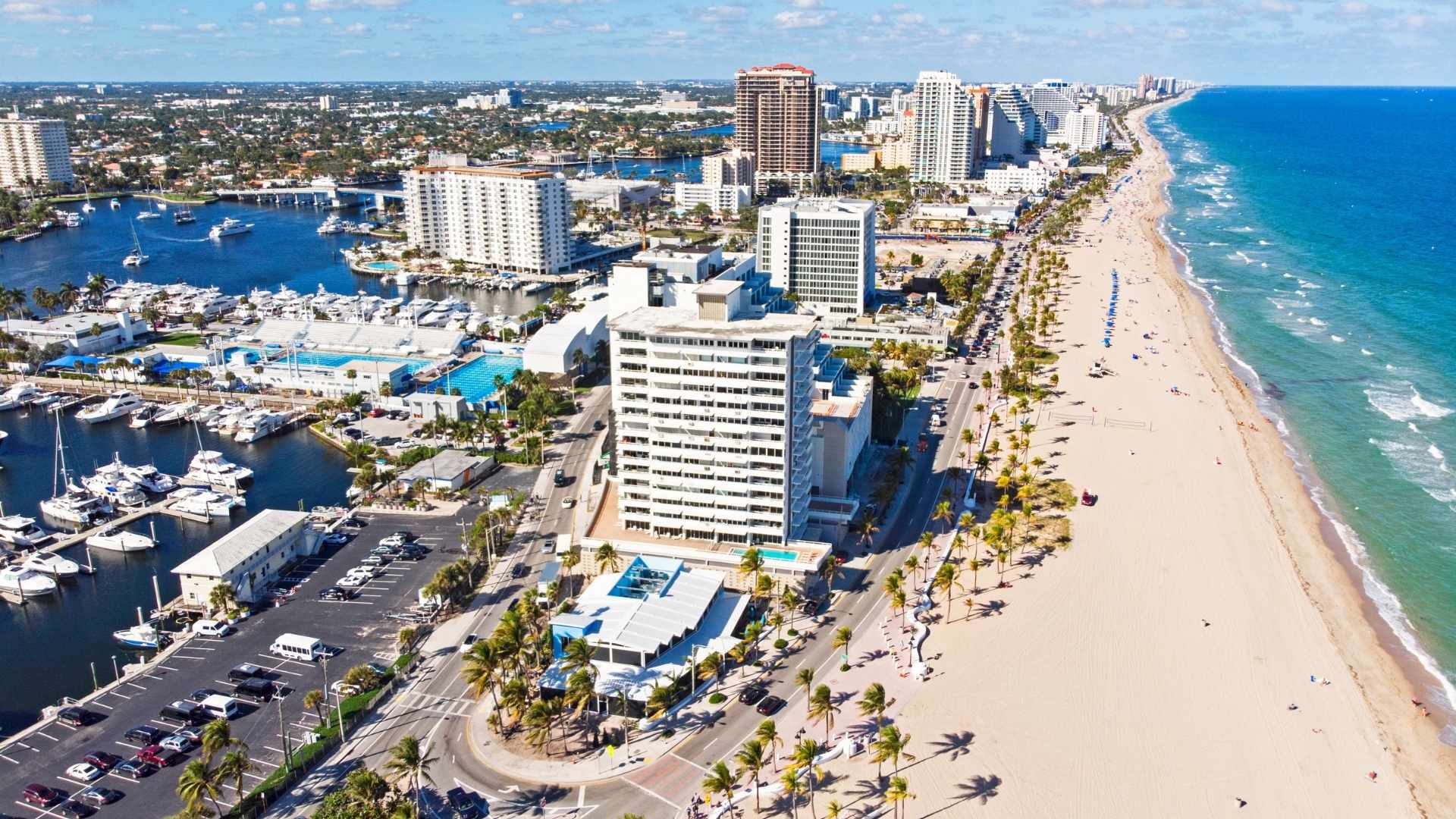 Previously known as the “Spring Break” capital of the world, Fort Lauderdale Beach has some of the most beautiful beaches in Florida.  With over seven miles of coastline along the Atlantic Ocean with a fantastic beachfront promenade along with a number of great shops, restaurants & entertainment venues as well as great hotels right across A1A, Fort Lauderdale is perfect for both tourists and locals alike.

There is two miles of Fort Lauderdale’s beaches that are fully manned by lifeguards.  This area ranges from the South Beach Picnic area up to Hugh Taylor Birch Stat Park.  Additionally, there is a public park which is located just south of Las Olas Boulevard and features volleyball and basketball courts, outdoor showers, restrooms, picnic tables with grills and a children’s playground.

While you are there make sure you visit the Elbo Room which is a bar that was first opened in 1938 and was featured in the 1960 film “Where the Boys Are”.  It’s a great place to relax and grab a drink while watching the beachgoers walk by. Pensacola Beach is one of the states most beautiful beaches.  With 18 miles of sugar white sand and emerald-green waters from the Gulf of Mexico, Pensacola Beach is perfect for you to relax in the sun and enjoy all the area has to offer.  There is the Gulf Pier which features amazing views as well as great fishing as the pier goes out into more than 20 feet of water depth.  There is a bait and tackle shop to rent your equipment so all you have to do is have good luck to bring home the big one.

There is a huge number of things to do here from walking along the Pensacola Beach Boardwalk, visiting great shops including a Ron Jon Surf Shot, and enjoying a wonderful meal at the numerous restaurants in the area.   Try Hemingway’s Island Grill or the Casino Beach Bar & Grille for some local flavor.

One of the best annual events held in Pensacola Beach is Red, White and Blues Week featuring the Pensacola Beach Air Show.  Pick a great spot on the beach and watch a number of great pilots doing amazing aeronautical displays including the world famous Blue Angels which are the US Navy’s flight demonstration squadron.

Our favorite Pensacola Beach hotels include: Miami Beach / South Beach one of the most sizzling hots pots in the entire world and the beach is a huge part of that.  Extending from South Pointe Park all the way up past the Fontainebleau Hotel to the North Beach area, there are miles and miles of white sandy beaches along the Atlantic Ocean for you to soak up some sun and enjoy.  All beaches are free and weather you are looking for some action or just some relaxation and solitude, Miami Beach has a spot for every single desire.

Up and down Miami Beach there are a number of public parks, restrooms, picnic area, walking paths and promenades, volleyball courts and lifeguard stands.  There is even a clothing optional beach which can be found at Haulover Beach.

South Beach with its art deco style is the most “touristy” section of Miami Beach with Ocean Drive intersecting the beach from all the swanky hotels, bars and shops.  There is always plenty of things going on in this area from both the visitors to the area as well as the South Beach locals. The white sandy beaches of Naples and Marco Island are some of the most picturesque throughout the state of Florida.  This area is known as Florida’s Paradise Coast and to go along with the clear blue/green water from the Gulf of Mexico, the beaches are often described as “sugar-sand” due to their bright white nature.  Every single evening you can take in some of the most spectacular sunsets that you will ever find.

A number of the areas beaches feature playgrounds, sand volleyball courts, picnic areas, restrooms and showers.  The Naples Municipal Beach off 12th Avenue South is home to the Naples Pier which dates back to the late 1800’s as it was originally used as a a dock for passenger ferries and freight.  Today there is a concession stand and 24/7 fishing access. The Pier is a great place to visit and take in the amazing sunsets.

In addition to the wonderful sunsets, locals and tourists alike are always looking for “The Green Flash”.  The Green Flash is a quick burst of green above the top portion of the sun as it sets over the horizon.  Some Green Flashes are larger and more noticeable than others. It’s not often people see this phenomenon but when you see it, you know that you have watched something special. Clearwater Beach is home to more than two-miles of extraordinary well maintained white sandy beach that sits on the edge of Gulf of Mexico is some of the states most amazingly calm & clear waters. There are lifeguard stations throughout the area and places to rent chairs and umbrellas.

Clearwater Beach was voted the #1 beach in America and in the Top 10 beaches in the world for 2019 by TripAdvisor’s Travelers Choice Awards.  The beach features a very pedestrian friendly Beachwalk Promenade with a number of restaurants and shops as well as Pier 60 at Clearwater Beach.

Pier 60 is the heart of Clearwater Beach and features a 1,000+ foot fishing pier and park that has a bait house, six covered pavilions, playgrounds  and multiple telescopes.  At the Pier’s entrance there are a number of inflatable water slides, a rock climbing wall and The pier hosts nightly events with craft vendors, street performers and of course a beautiful sunset.  There are even outdoor movies which are shown on weekend nights when the weather is clear.

Our favorite Clearwater Beach hotels include: You probably have noticed that the beaches along the west coast of Florida not only to our list but also rank at or near the top on a number of the travel services that also rank Florida’s beaches.  Our guess that is that its the white sand from the Gulf of Mexico as well as lesser populated areas as compared to Miami and the South Florida area.

Our top beaches is Sanibel Island which was rated #1 beach in Florida by US News & World Report as well as the #3 best beach in the United States (behind Maui and Kauai, Hawaii which are both on islands in the Pacific so one could argue that they have an unfair advantage).

Sanibel Island is a barrier island just off of Fort Myers that is very unique as it has an east-west orientation (most barrier islands in Florida are north-south). There is beautiful white sand and amazing emerald blue/green waters with some of the best shelling throughout Florida and the Atlantic Coast.  Sanibel is perfect to grab a book and just relax, listening to the gentile Gulf waters lap along the shoreline.

There are a number of public beaches with restrooms and shots, a fishing pier, boardwalks, picnic areas and ample parking.  These beaches are as follows:

And while you are there, make sure you visit the Sanibel Lighthouse which is at Lighthouse Beach Park.  This was one of earliest gulf coast lighthouses and was first lit in August 1884.  The light is 98-feet above sea level and is on top of an iron skeleton tower.  Although you can not climb to the top of the lighthouse, you can walk the grounds.